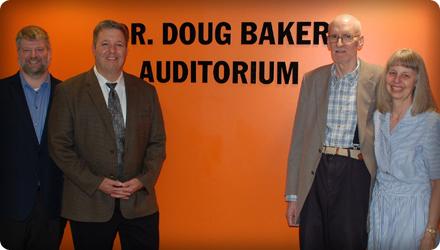 Longtime OSU-OKC professor Dr. Doug Baker recently entered into retirement, but not before leaving a lasting impression on the entire campus and a large void in the Liberal Arts Division.

For more than 20 years, Baker taught a variety of history courses such as U.S. history, world history and European history, as well as taught philosophy and religions courses. He served as the lead religion instructor for over 10 years and authored OSU-OKC’s current Survey of World Religions course.

In addition to his duties on campus, Baker has been a published author and minister. At OSU-OKC, he served as chair of his department, two terms as president of the Faculty Senate, and presided over hundreds of academic appeals hearings.

OSU-OKC Liberal Arts Division Head Jason Stone calls Dr. Baker a “luminary of shared governance at OSU-OKC.” The seasoned professor taught tens of thousands of students during his time on campus. “During that time, I witnessed Dr. Baker open thousands of minds through the art of conversation,” Stone says. “Dr. Baker always made time for students and colleagues.”

To honor his legacy, OSU-OKC President Natalie Shirley sought to rename one of Dr. Baker’s classrooms after the well-known professor. Learning Resource Center room 100 will now be known as the Baker Auditorium. A reception was held earlier this month to formally dedicate the room.

Comments about the beloved Professor Baker flooded a webpage set up to gather memories, stories and accolades from alumni, faculty and staff sharing their experiences with him. Stone says the one phrase that permeated through all of the comments was “mentor.”

“Dr. Baker was a mentor,” Stone says. “He taught our division how to love, care, teach, learn, laugh and be available. He showed us how to share governance, to give it ‘all’ to the students, to hold the administration accountable, and to ensure that what is best for the campus is what everyone strives for.”

Below are additional comments from fellow faculty members about Dr. Baker.

Dr. Steven Collins, Political Science associate professor: When I got the job here, I decided that I wanted to expand the political science offerings. I added civil rights and comparative politics. Dr. Baker heard that I was adding comparative politics and approached me about sitting in on the class. I, of course, said yes because I felt honored. I didn’t know he meant literally the entire class, not just one session! It was a bit intimidating at first, but then I realized how helpful and gracious he was to me. My students even said that it felt like they had two professors in that class.

Dr. Karen Jobe, English department head and professor: Dr. Baker is what I would call a graceful activist. He got things done but he did it gently. He was never pushy or loud but he was also never silenced. I have known him to be an advocate for faculty rights and responsibilities, and he contributed to a better environment for the entire campus. Around the time I joined the faculty, he was a major player in the change from a Faculty Council to a Faculty Senate format. He saw that I was interested in advocating for faculty and was instrumental in getting me involved in Faculty Senate. He was dedicated to shared governance and he worked long and hard for many years to put together the Memorandum of Understanding regarding shared governance on campus. A master negotiator, Doug Baker’s retirement leaves a leadership void on campus. Frankly, I don’t know who will chair all those committees and task forces!

Dr. Dorothy Weaver, Behavioral Science department head: Dr. Baker always seemed to expect that everyone would do their best and that their best would be excellent. Every time I worked with him, my results were better than I expected. Every single time, he led me to do more than I had thought I was capable of. 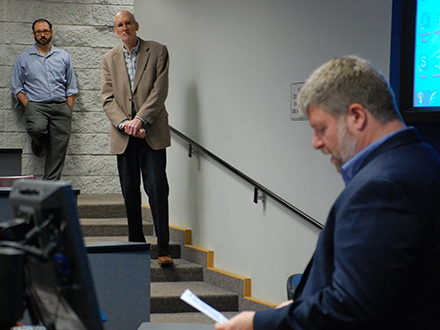 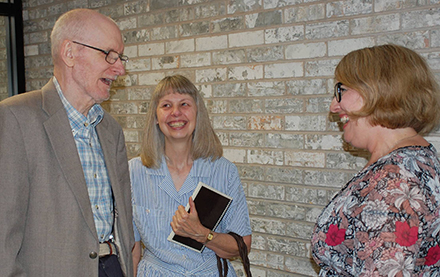