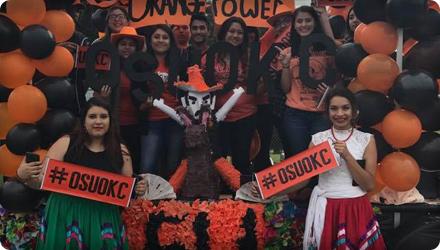 Oklahoma State University-Oklahoma City’s (OSU-OKC) Hispanic Student Association (HSA) recently won first place for their float at the Fiesta de las Americas, a multicultural heritage event that takes place during Hispanic Heritage Month. The win – a first for OSU-OKC’s HSA – was a true reward for the group who spent hours working on the perfect float to showcase their roots.

HSA students and their club advisor, Joanna Hernandez, sat atop and walked alongside their float during the parade portion of the event that also included live entertainment, food and family activities. Their float highlighted the theme of family.

“This is the first time OSU-OKC has ever won the award at the festival,” Hernandez said. “The students were super proud of themselves and are already talking about how they can make next year even better!”

Hernandez was thrilled to be a part of the festivities and especially to see her students take the top prize for their float. “These students worked for days on this float,” she says. “They gathered at a student’s house and decorated until it was dark outside because they really wanted to win and were determined to do so. I am so proud of them!”