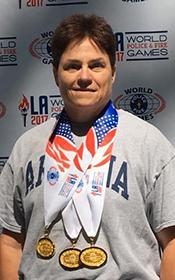 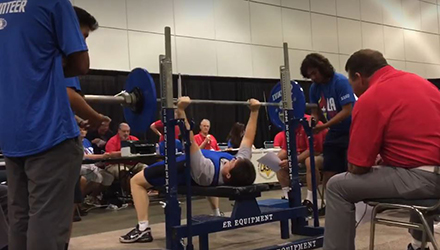 The World Police and Fire Games are an Olympic-style competition with 10,000 athletes representing law enforcement, firefighters, and officers from corrections, probation, border protection, immigration and customs from more than 70 countries. Athletes compete in more than 60 sports.

Prior to leading the Public Safety Department, Wojcik was the first female firefighter in the Yuma Fire Department. Her service in Yuma made her eligible to compete in the games.

Wojcik’s initial inspiration to compete was to improve her health and get back into the gym. To train, she concentrated on three things: weightlifting, cardio training and nutrition. She sought help from OSU-OKC Wellness Center staff, coordinator Victor Amarteifio, and attendants Kevin Galloway and Ronel Peter. “They all were very helpful in spotting during heavy-lifting and regular encouragement,” she says.

Her rigorous training paid off and she excelled during competition. She calls the games an awesome, humbling experience. “While it is competitive, there is so much encouragement and support from the other athletes.”

Wojcik’s goal for the games was to put her very best out there. Her mother and two sons were able to travel to Los Angeles to watch her compete, which made it even more exciting to win.

“Having my family as a support system was so nice,” she said. “They were all so excited to see all the activity and be a part of my participation. When you are in such a big competition, having a close support system is key to success.”

Wojcik plans on competing in next year’s Canadian/American Games in Missouri and her training regimen has begun. After that, the games move to Chengdu, China in 2019 and she plans on making the decision to compete in those games that year.

“I want to thank everyone at OSU-OKC for their support and encouragement,” Wojcik says. “I could not have been this successful without the support. My success is a testament of great teamwork in and out of the gym, on a campus of staff, faculty, students and administrators who cared about me and my training. I am so grateful.”