OKLAHOMA CITY (Feb. 3, 2020) – Cliff Kinsler is a state trooper, a member of the Oklahoma Army National Guard, a college student and, most recently, a TV personality.

Kinsler, 39, is one of a dozen Oklahoma Highway Patrol troopers who appeared in episodes of “Live PD” last season on the A&E Network. The show follows law enforcement officers from agencies across the country while they work the night shift.

When Kinsler was spotlighted on the “Live PD” Facebook page, the comments came pouring in. Among the most common were, “He’s one of my favorites” and “Love that smile.”

While the TV ride-alongs are entertaining for viewers, the officers involved are on the job pursuing fugitives and responding to victims of violent crime.

Kinsler prepared for his career with Army basic training and the police science program at Oklahoma State University-Oklahoma City, where he earned his associate degree in 2012. Now he is back at the school working on a bachelor of technology degree in public safety management.

The Oklahoma State University-Oklahoma City (OSU-OKC) police science curriculum is accredited by the Council on Law Enforcement Education and Training, but it expands on the minimum requirements for Oklahoma peace officers.

“It’s a really good program. It’s where I started out,” Kinsler said. “They teach more than CLEET.”

Many of the instructors have experience in law enforcement and use that to enhance the curriculum, he said.

The coursework for his bachelor’s degree is offered 100% online, which allows him to complete assignments around his work and family commitments. 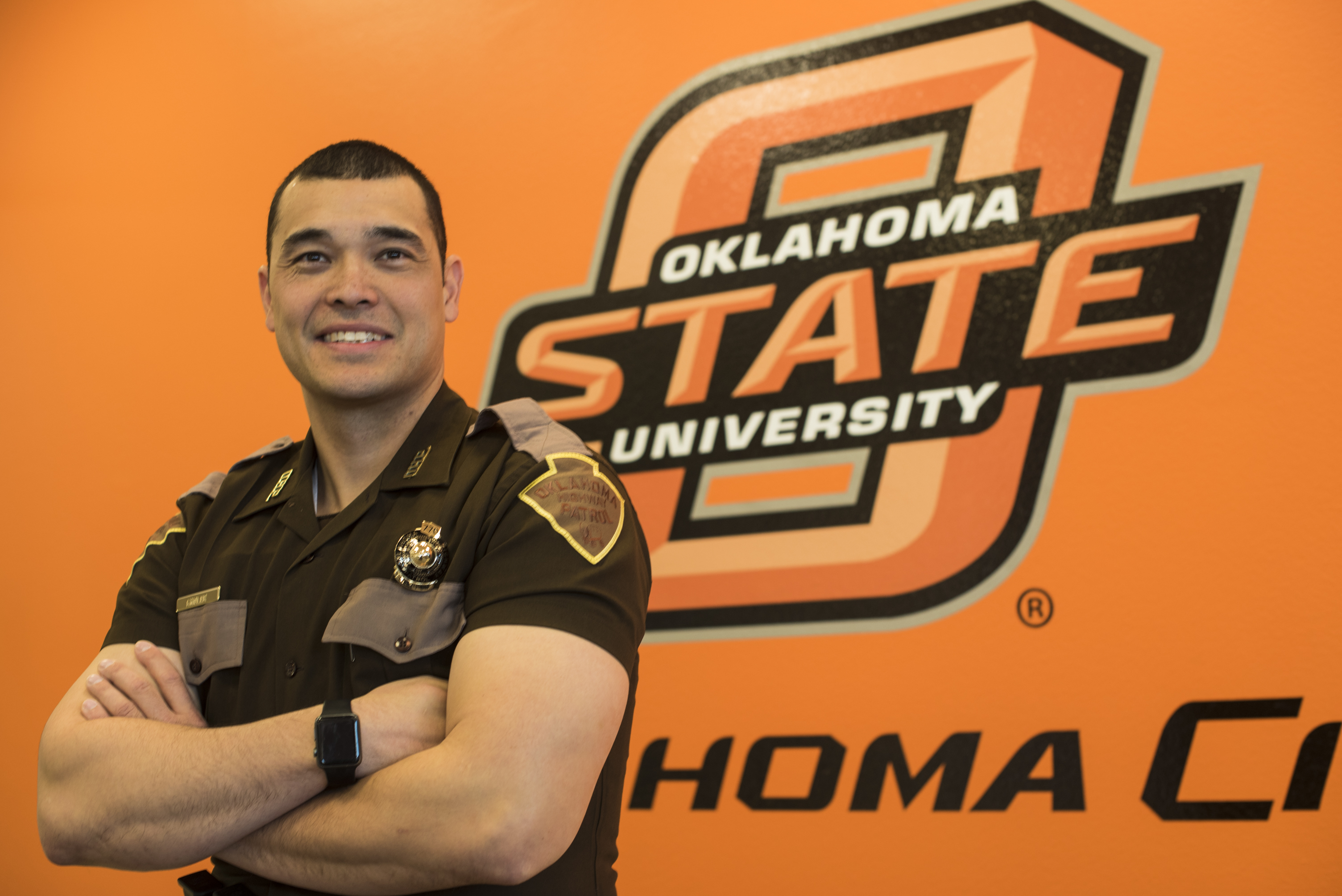 The producers of “Live PD” made every effort to avoid disrupting the job the troopers had to do, but their presence presented a challenge, Kinsler said.

“We’re used to working independently and by ourselves,” he said. Having one or two other people in the car was “like having a guest in your house. You want to entertain them and show them what you do.”

And on a slow night, there wasn’t a lot to show.

At times the crew chatted with Kinsler and recorded footage to be used at a later time to supplement the storyline on live nights.

Those live nights were the easiest, Kinsler said. The crew didn’t interact with him. They just silently recorded him at work and fed the video to producers in New York who decided what viewers would see.

“You’re just doing your job. You don’t know if it’s being aired or not,” Kinsler said.

The camera’s presence was not a distraction, he said. “We’re always in front of a camera because of the in-car camera.”

Kinsler said the exposure on “Live PD” was good for the OHP.

“There was great feedback and a lot of people across the state say, ‘We wish you were still on.’ I think it represented us well,” he said.

Kinsler said OHP is a close-knit family, which he became a part of seven years ago after completing the demanding 20-week academy.

“From Day One, I really enjoyed it. I don’t know why I didn’t do it earlier in my law enforcement career,” he said.

The training is tough. Of the 48 cadets who were accepted into the most recent OHP academy, 29 graduated. But Kinsler said it is worth it.

OSU-OKC police science students can learn more about career options with the OHP through an educational partnership between the college and the Oklahoma Department of Public Safety.