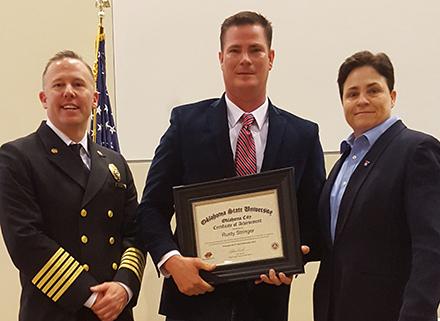 Captain Stringer was hired by the Broken Arrow Fire Department in July 1997. He was promoted to Lieutenant in July 2006 and then to Captain in March 2008. He attained his bachelor’s degree from OSU-OKC in May 2016. The knowledge he absorbed from his degree program has prepared him well to operate at any level in the department. His ability to quickly adapt and learn new things is a product of the foundation achieved through his education.

Recently, Captain Stringer volunteered to fill in for Deputy Chief of Operations during a prolonged absence. During that time, Captain Stringer stepped out of the fire station and off shiftwork to work a standard workweek and lead the operations division. He filled the staff position for several months and handled supervision of all three shifts and the physical resources group. During his time as Acting Deputy Chief, he quickly learned the role and responsibilities.

Captain Stringer didn’t just occupy a spot, but he also found creative solutions to problems that persisted for many years. He identified organizational inefficiencies and suggested solutions. He directed the supply process for both station and EMS supplies to the physical resource staff, which allowed frontline personnel to focus more on serving citizens. He procured budgeted items in a timely fashion and helped with the direction for the 2019 budget and other departmental needs. He brought quarterly Captain and Battalion Chief meetings to fruition to better open lines of communication from the frontline to the administration. Most people can step up and fill a void, but in this situation Captain Stringer stepped up and helped create an expectation of excellence for a recently created deputy chief’s position within the department.