OSU-OKC director of library services takes to the skies 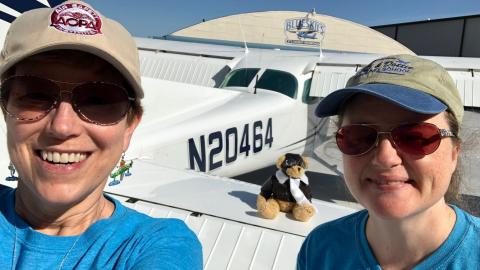 OKLAHOMA CITY – When the Air Race Classic scrapped its traditional format in favor of an air derby for 2021, Elaine Regier jumped at the opportunity to participate.

The Oklahoma State University-Oklahoma City family knows Regier as director of Library Services, but they may not know she has been flying since 1988.

The event was cancelled in 2020 due to the COVID pandemic. It will return June 21-24, 2022, starting in Lakeland, Florida, and ending in Terre Haute, Indiana.

For this year organizers offered an alternative they called “A Twist on Tradition.” The 2021 ARC Air Derby allowed each participating team to choose their own five-leg, one-day route.

“The ARC Air Derby will provide an opportunity for women pilots around the world to challenge their piloting, flight planning and navigation skills and share their love of flying with other women pilots in a fun event that avoids large gatherings and supports recommended health safety protocols,” organizers said.

Regier and her co-pilot, Holly Blunk, were among the 85 teams of women pilots from across the United States and other countries who mapped a route and took to the skies sometime between June 12-26.

They rented a Cessna 172 Skyhawk from Matt Cole at Blue Skies Aviation in Guthrie, who allowed them to schedule the plane for multiple days in case the weather didn't cooperate.

The two pilots used a flight planning app called ForeFlight and Google Earth to get the latitude and longitude. They planned the required five legs of at least 65 nautical miles each and submitted their estimated time in minutes and seconds for each leg before takeoff.

“We did not win any prizes, but we are extremely happy with our results. We missed our time by 1.999 seconds on the first leg,” Regier said. “We did place 10th for that leg.  That shows how competitive this race is. It means that nine other teams were closer to their estimated time than 1.999 seconds.”

During a teachers’ aerospace workshop 35 years ago Regier took a flight with three women pilots and thought, “If they can do it, I can do it.” Two years later she had her pilot’s license.

“It’s fun. In some ways it’s therapy, it’s an escape and I feel closer to God,” she said. “Looking down on Earth is incredible.”

Regier said she did more flying in May and June preparing for the derby than she usually does in an entire year. She also learned a lot by planning the flight and navigating with Google Earth.

“It was an exciting day,” she said.