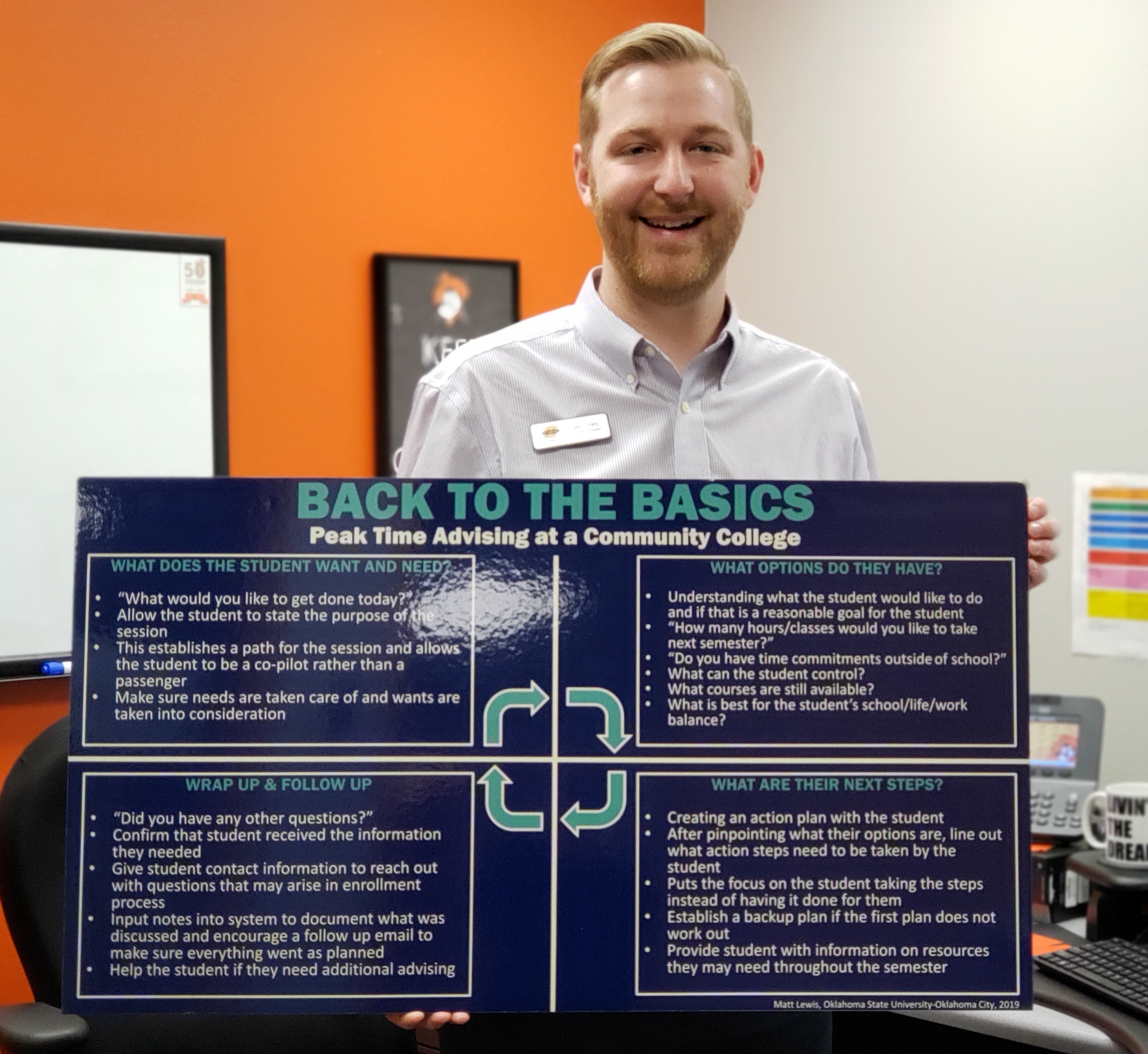 Last summer was Matt Lewis’ first experience with peak enrollment at Oklahoma State University-Oklahoma City. He was new to his job as an academic advisor, having worked as graduation specialist at the school since June of 2017.

Lewis was immediately struck by the sheer volume of students needing assistance during such times. Concerned he might not be giving students the information they needed, Lewis decided to formalize Oklahoma State University-Oklahoma City’s (OSU-OKC) advising process by developing it into an outline.

Lewis’ resourcefulness and hard work ended up garnering him an invitation to present at the regional conference of the National Academic Advising Association (NACADA) in San Antonio, Texas, which took place March 9.

“When I started in August, it was the tail end of the peak period. All of our advisors would see at least 30 students per advisor every day, sometimes more,” Lewis said. “I documented our four-step process for advising sessions in an outline, and that helped me assist students in a timely, efficient manner. My end goal was to make sure each student knew their options and had the information they needed for the first day of class.”

“Matt’s passionate about academic advisement. Being a new advisor, he’s really been honing those skills. He’s had a positive impact on the team and on his students,” Dick said. “Attending NACADA has been a great opportunity for him to share his experiences working at an open-admission institution.”

Lewis said he utilized his advising process outline during January enrollment and noticed a significant difference.

“I was able to cover all enrollment basics with students during advising sessions and meet their needs,” he said.

At the conference, Lewis shared his experiences as an advisor with professionals from all types of institutions. His presentation was entitled, “Back to the Basics,” and in the Q&A that followed, Lewis noted he received positive feedback from attendees.

“The main theme of the conference was strategic advising. I think ‘Back to the Basics’ was probably selected because it dovetailed with the conference focus,” said Lewis. “OSU-OKC’s four steps are process-based, so they can work in other schools and be customized to different situations.”

Lewis said he hopes those who attended his presentation will remember the steps and use them during peak enrollment periods.

“It’s an easy takeaway because it is a very student-focused process: What do students want and need, what are their options, what are their next steps,” he said. “Then wrap-up things up and make sure the student has follow-up information. It’s really all about the students.”