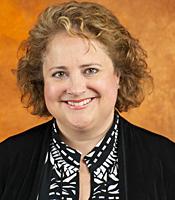 After spending a lot of time in airports over the course of a few weeks, Vleugels spotted a pattern on The Drudge Report webpage and wondered if she could see the same patterns in media coverage. The webpage was reporting on U.S. presidential candidate Clinton’s “hacking cough.” Upon researching the webpage, she was surprised to find little information on site creator Matt Drudge as well as the site’s staff, which raised a lot of questions.

“My questions coincided with a reemphasis on media literacy,” Vleugels says. “I’m hoping others will look at [my paper] and go further with other sites and opinion makers in the media, the relationship between Drudge and other key media players, and research more of the agenda-setting nature of biased websites.”

Vleugels has already integrated the paper as a lesson in her OSU-OKC mass media course in hopes of furthering the research.

In addition to teaching full-time and pursuing her Ph.D. through Oklahoma State University, Vleugels is also continuing research on foreign correspondents in the U.S. and how they present the U.S. image abroad.

“I am interested in bridging the gap between working journalists and consumers,” she says. “Since all of us on campus are media consumers – many of us via social media are media creators – and recent opinion research has shown people distrust the media, yet believe what they read, there are lots of avenues for research and implementation in higher education.”

Read a copy of the abstract below:

In the 2016 U.S. presidential election there were many aspects of media complicity, bias, gatekeeping, agenda-setting, convergence, cultivation and media literacy to explore during the lead-up to the actual election. This paper will explore how the online news aggregator The Drudge Report set the agenda for conversation about Hillary Clinton’s health by repeatedly referencing a “cough.” While the website linked to a story highlighting coughing by Clinton at one point in 2007, and to video on a blog again in 2008, there was little mainstream news coverage until The Drudge Report increasingly ran headlines about Clinton reportedly coughing. Clinton’s health became something highlighted regularly in linked sites and in original content posted on The Drudge Report starting in January 2016 with increasing frequency. It will also show the relationship between The Drudge Report and various other news sources to which the site frequently directs its visitors.

Without arguing the accuracy of that particular coverage, nor the veracity of subsequent coverage about Clinton’s or any other candidate’s health, this paper will map out the coverage, both repeated and new content, on various popular news outlets.

Exploring how the subject of a “cough” was referenced on the site and others starting in January 2016, when the news aggregator increasingly linked to websites and blogs, is a unique study of how a news aggregator eventually set the agenda for other online, print and broadcast media, and will be an exploration of how The Drudge Report specifically emphasized the coverage on that site and on others. This paper will also detail how the response of other online, print and broadcast outlets, whether complicit or contradictory, may have demonstrated cultivation theory, which has been typically researched in respect to film and television entertainment.