How a blind grandmother won a prestigious scholarship

At age 51, Cathy Tuton is not your typical Oklahoma State University-Oklahoma City student. She’s a wife, a mother with three adult children, a grandmother with eight grandchildren, and is resolutely pursuing an associate of science degree in Enterprise Development, her third associate degree. 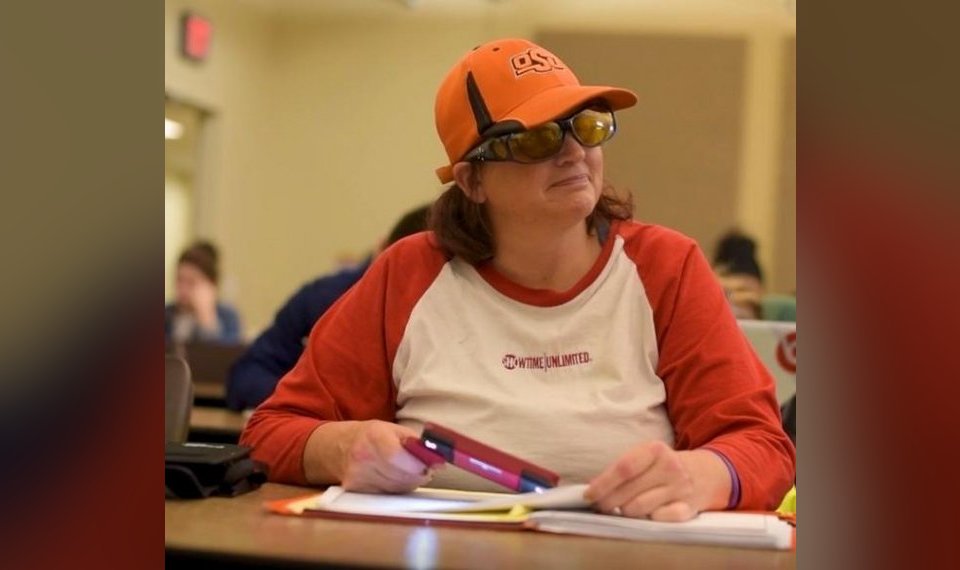 While it might be unusual to pursue yet another degree at her age, Tuton also is navigating an additional challenge in her midlife evolution: Aniridia, a degenerative eye disease she was born with that has progressed to the point that she is blind. The disease manifests with an incomplete iris or complete lack of an iris.

"When I was younger, I was on the high end of being visually impaired,” Tuton said. “I could still see fairly well out of my right eye. Now, light perception is pretty much all I have. If the light is just right, sometimes I can see big shadows, but I can't make out what that shadow is."

Tuton tackles her life and her studies at OSU-OKC with a fearless attitude and an infectious smile. She has a passion for helping people live healthier lives, and this third degree — her first two were in fitness training and massage therapy — is the first step toward her goals of obtaining bachelor’s and master’s degrees in dietetics and possibly a doctorate after that.

Getting to this point — a 12-year journey — hasn’t been easy for Tuton. In 2007, she was hit by a truck while training with her seeing-eye dog in San Francisco. Her injuries were severe enough that her doctor advised against continuing her career as a massage therapist.

By 2016, Tuton knew she wanted to do something in a medically related field that would require more education. She also realized that because she started life with better vision, she had not acquired the skills she needed to function properly as a blind person.

Enter the Louisiana Center for the Blind (LCB) in Ruston, Louisiana, where for nine months Tuton received intensive training focused on learning to live independently and self-sufficiently as a blind person including the proper use of a cane, how to use a computer and screen reader, and reading and writing in Braille.

Tuton’s time at the LCB was a turning point where she learned how to handle whatever situation life might send her way. She recalls several training sessions where she was driven around town by staff, dropped off, and told to find her way back to the center.

Tuton’s perspective about what she could do shifted even further when the LCB introduced her to whitewater rafting, rock climbing and zip-lining.

“I’m kind of a daredevil actually. I go skydiving, rock climbing and zip-lining and things like that. Those kind of things give me a thrill,” Tuton said. "What I learned from all that is that I can do anything anyone else does; I just do it a little differently.”

When she was a child, Tuton was told her degenerative eye disease meant a career in a medical field was not an option. Due in part to her newfound approach toward life as a blind person, Tuton was ready to take on that assumption.

Before Tuton left for Louisiana, she had started applying for a scholarship from the NFB, which is the nation's oldest and largest organization of blind people and home to the largest scholarship program of its kind in the nation. She was turned down twice, but discovered she needed to show the NFB she could handle college and achieve decent grades to illustrate she was worthy of the scholarship.

Tuton enrolled at OSU-OKC, made the honor roll her first two semesters, and applied a third and then fourth time for an NFB scholarship. On the fourth try, Tuton’s unwavering determination reaped a win.

“I was shocked, speechless and I cried,” said Tuton, describing how she felt when she won a scholarship — one of two students from Oklahoma and one of 30 outstanding blind students from across the nation to win a 2018 scholarship from NFB.

Hundreds of blind scholars from across the United States and Puerto Rico apply each year for more than $120,000 in scholarships that recognize their achievements and professional aspirations.

"The scholarship program is one of our most important initiatives," said Mark Riccobono, president of the NFB, in a press release about the 2018 winners. "We are proud to honor these blind scholars who are studying everything from aerospace to ethnomedicine, and in so doing raising the expectations of what blind people can achieve. Their accomplishments are proof of our conviction that we, the blind of this nation, can live the lives we want; blindness does not hold us back."

Tuton received a $5,000 STEM (science, technology, engineering and maths) scholarship and a bevy of other awards: a $1,000 check and plaque from inventor and futurist Dr. Ray Kurzweil; a Google Chromebook laptop; a $1,000 cash award from Google; a certificate toward the purchase of a Talking LabQuest from Independence Science; and nine months of service from Aira, a service that helps visually impaired individuals live independently through the latest, personalized assistive technology.

“Cathy is one of the most determined people I’ve ever met,” said Emily Cheng, director of Disability Services and Diversity at OSU-OKC. “She really inspires me because she doesn’t let challenges get in the way of her success. Her positive energy is absolutely contagious.”

Tuton knows many challenges remain as she pursues her goals, yet her outlook is audaciously positive as she reflects on how she’s persevered so far.

“All the challenges and difficulties I had to work through and fight through during my whole life really set me up to keep going,” Tuton said. “You have to surround yourself with people that will encourage you and push you along. I feel like OSU-OKC does a really good job at making accommodations for people that have different types of disabilities and different types of challenges. I think the whole school, in general, has been a wonderful experience so far.”

This story was originally published by The Oklahoman on April 28, 2019. View the story on The Oklahoman's website here.